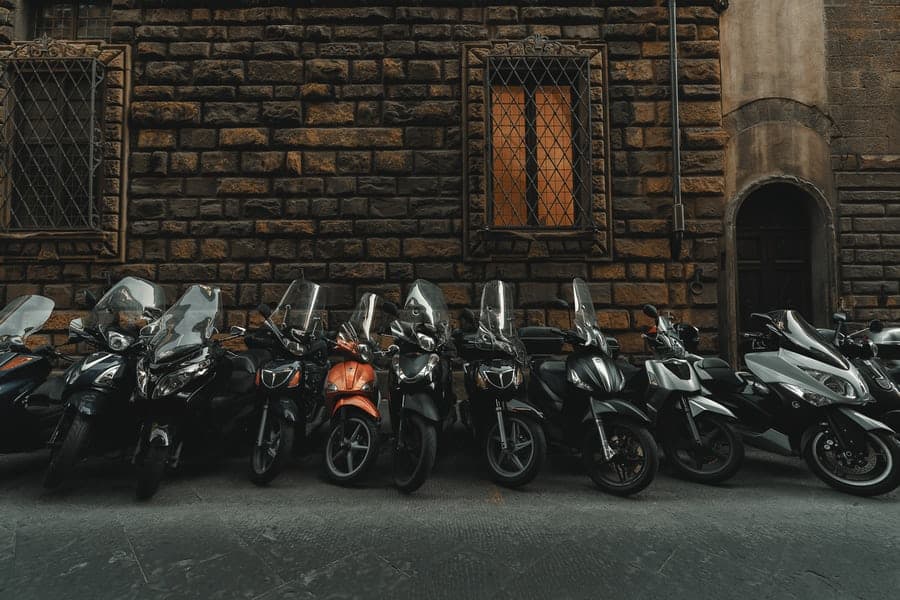 Many motorcycle enthusiasts, often Harley riders and sports racers, feel hipsters only care about looking cool. However, the truth is more complicated.

Hipsters have introduced a whole new generation to the world of motorcycles. This renewed interest is helping to revitalize a lagging industry. Major brands such as BMW, Harley, and Ducati have debuted new bikes geared towards hipsters.

Hipsters have also helped reintroduce the world to long-forgotten types of bikes such as café racers, scramblers, and other “old” bikes. Their willingness to embrace outside bikes is providing a shot in the arm to a stagnant biking culture.

Hipster bikes are here to stay, and they’re far more complex and interesting than the naysayers would have you believe. Here’s a closer look at what you need to know about hipster motorcycles.

Hit the Road with these Hipster Motorcycles and Must-Have Gear

Whether you’re a veteran rider or newbie, you’ll find plenty of fun, stylish bikes, and cool gear. Here’s a look at our favorites:

A café racer is a fast, stripped-down motorcycle popular throughout Europe in the 1960s. They were bare-bones bikes made to traverse the narrow, cobblestone streets found through European cities.

Café racers are Frankenstein-bikes, with each one uniquely made by the owner. The idea is to remove as many non-performance-related components as possible. What remains should be lightweight but strong, such as this rear seat frame hoop from Tarazon or this retro diamond seat from Triclicks. 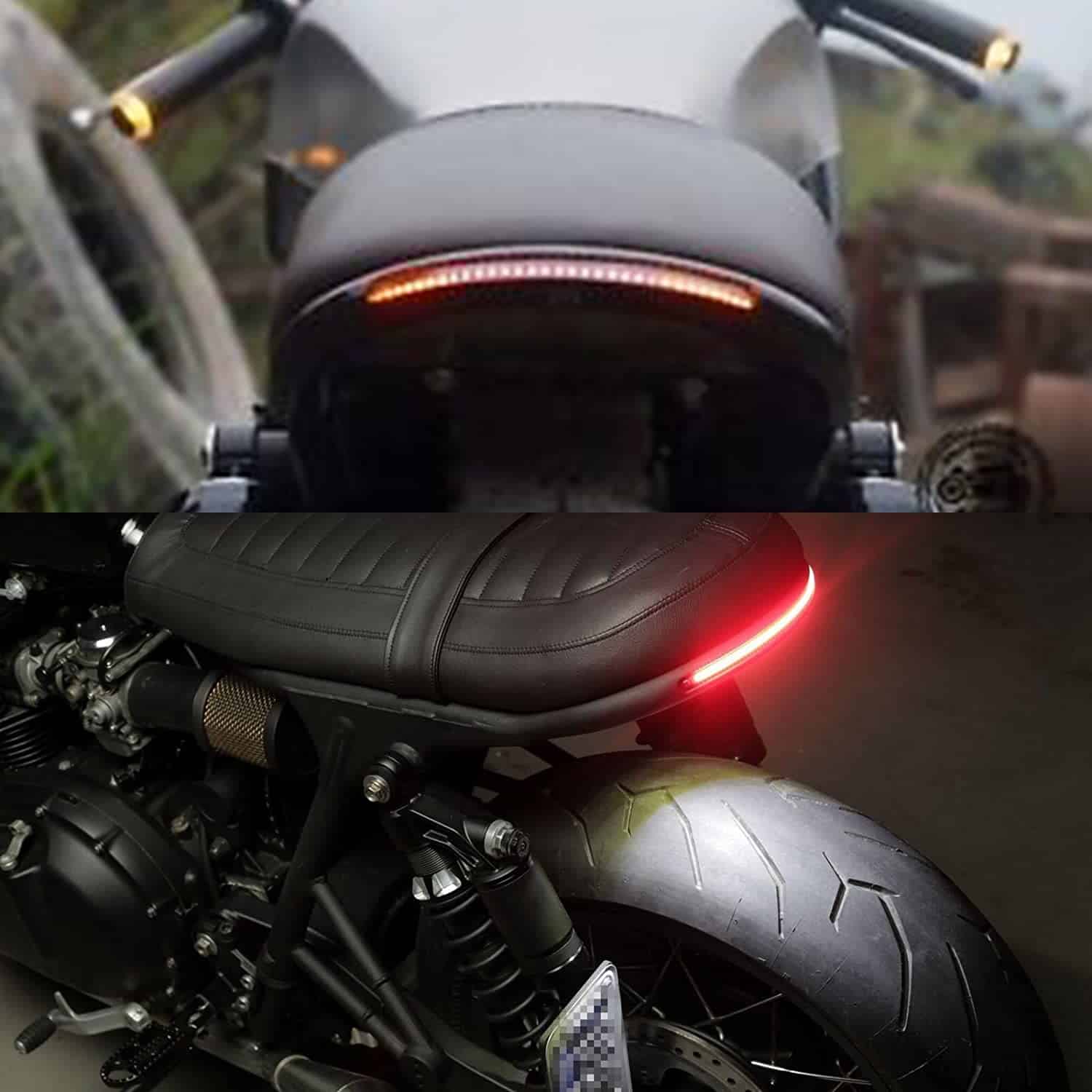 A touring bike is designed for long rides over far distances. Although you can take any bike on a long journey, touring motorcycles have a few unique features such as:

Hipsters have taken to touring bikes, both for their intended purpose of long-distance travel plus for use as around-the-town riders.

One of the most popular touring bikes among the hipster set is the Honda Gold Wing. Originally released in 1974, Gold Wings are now in their sixth generation and enjoying renewed popularity thanks to hipsters.

The standard Gold Wing is a bulky, heavy bike with lots of cargo space and other features. However, hipsters are interested in stripping down these bikes for urban use.

Aside from the bike itself, Gold Wing gear has become a hipster status symbol. Check out this vintage Gold Wing long-sleeved shirt featuring the classic logo. It’s also available with a gold-colored design. 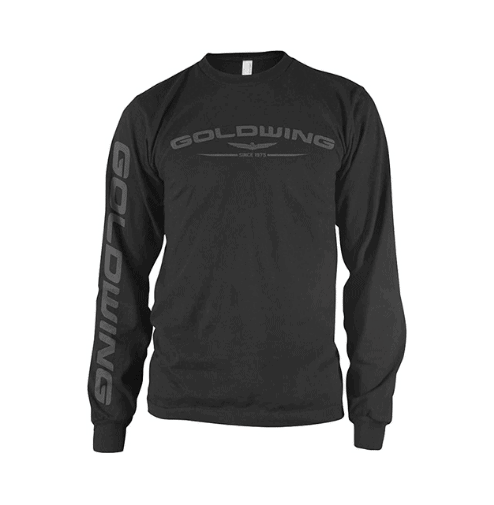 This shirt is 100% cotton with screen printed graphics. It is a Honda Motorcyle branded shirt, tshirt, tee, tee shirt.

Hipsters are all about taking something uncool and making it cool. Is there anything more uncool than a moped? It’s easy to see why hipsters love these pint-sized but powerful motorcycles.

Mopeds are motorized vehicles with an engine size under 50 ccs. Pedals usually operate them. The name “moped” is a combination of the words “motor” and “pedal.” A scooter, which has a similar size and style, is operated by handlebar controls.

Hipsters love mopeds because they’re designed for crowded city environments. Mopeds are fuel-efficient and can be stored indoors. Plus, depending on local laws, they’re often allowed on sidewalks. (However, they’re rarely allowed on highways.)

Despite the fact they typically require less licensing than motorcycles, certain laws still apply to mopeds. For example, many areas require riders to wear helmets.

Fortunately, many helmets have a distinct hipster style. Check out this half face helmet from AHR. With an ABS shell and high-density buffer layer, it’ll keep you safe. Plus, the half-face design, lack of visible vents, and leather chin strap create a cool, vintage look. 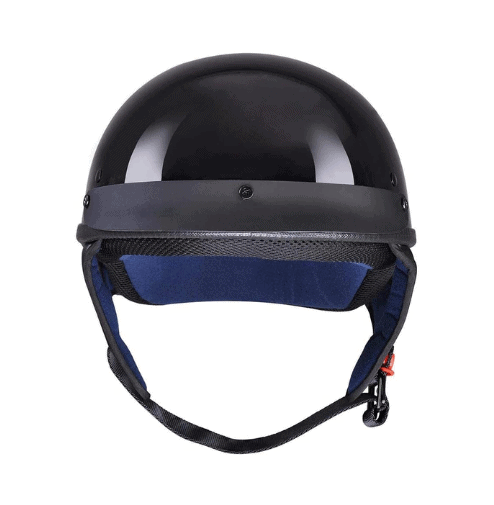 The MZ-Ural is big, intimidating, and nearly unstoppable. First made in the Soviet Union during 1940, the original production stalled due to a little incident called WWII. But despite war-related delays, the Ural persisted.

Persisting is its thing. The Ural’s main claim to fame is its ability to ride across the snow, gravel, sand, and whatever other terrain stands in its way.

Plus, they have the ultimate hipster motorcycle accessory: a sidecar. You can strap on a sidecar for your adventures. Bring along a hipster pal or, even better, a hipster pet. (Yes, we’re serious. Check out Dogs Ride: Motorcycle Sidecar Riding for Dogs (and Humans) for tips. 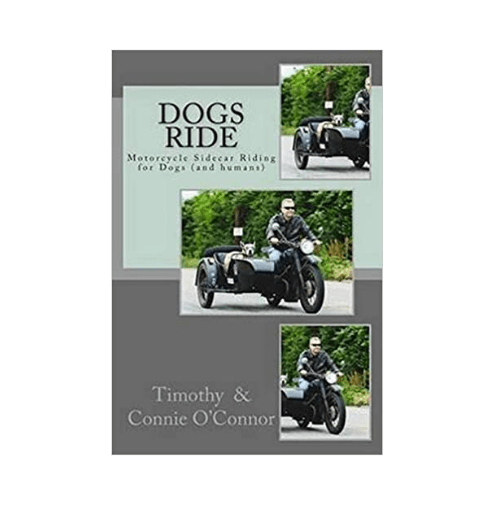 Dogs Ride is a comprehensive guide for anyone interested in taking their dog motorcycle riding in a sidecar. It contains hints, tips, product reviews, services, sage advice, safety information and a guide to all topics related to dogs riding in motorcycle sidecars. This book is intended for people that are not yet experienced side-car operators, and would like to learn what to expect.

Obtaining a Ural isn’t always easy or cheap, but they’re a prized possession. If you can’t find the Ural of your own, you can always sport some cool merchandise such as this vintage Ural T-shirt or this humorous “Eat. Sleep. Ride Ural.” tee. 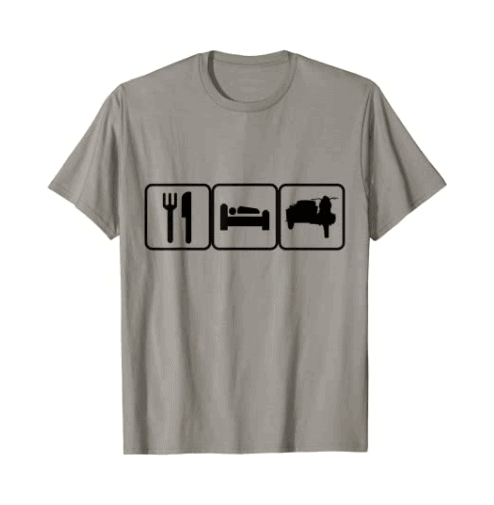 This t-shirt is meant for people who love motorcycles with a sidecar Ural. This t shirt is a good gift to your father, grandfather, son, uncle, a friend for his birthday, Christmas, father's day, veteran's day.

Finally, if you’re interested in the Ural, check out Motorcycle and Motorcycling in the USSR from 1939. It’s a comprehensive history of Soviet-era motorcycles from the technical specs to the culture and more.

motorcycles and motorcycling in the ussr from 1939

Motorcycles and Motorcycling in the USSR from 1939 provides the first accessible English language account of motorcycles in the Soviet Union. Concentrating on the wartime and postwar period until 1990, prior to the dissolution of the USSR in 1991, it covers the motorcycles produced, and looks at the way in which they were used at home and exported abroad.

Motorized bikes and scooters are enjoying a sudden, if controversial boost of popularity throughout the U.S. However, they’ve actually been around for decades.

A product called the Whizzer made a brief but notable impression on pop culture starting in 1939. It was a kit that the consumer assembled at home and attached to their traditional bike. It turned a regular bike into a motorized wonder.

Well, that was the idea, at least. The Whizzer worked, but it was from an electrifying hit. Production ceased in 1965. Interestingly, an improved version hit the market in 1997 but was an immediate flop.

Today, the Whizzer is a prized hipster commodity, as much for its interesting history as it’s vintage styling. If you can’t find a real Whizzer for sale, this authentic Whizzer dealer sign makes a great decoration for your home or garage. 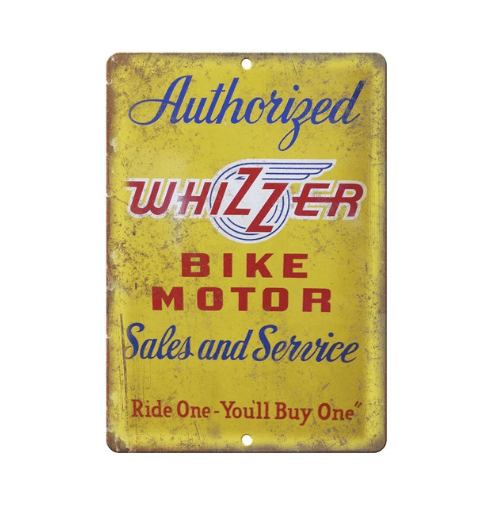 These signs are completely unique and make a great conversation piece in any room. They are perfect for kitchens, offices, man caves, bathrooms, garages, kids rooms, workshops, game rooms or any other place in need of something truly unique. They also make one of a kind, out of the ordinary gifts.  Each sign is made to order and individually handcrafted.

While real Whizzers are hard to find, you have plenty of other options if you’re looking for an electric motorcycle. T4B has a retro-styled electric bike powered by a Li-Ion battery. It’s specifically designed to look like a café racer from the 70s, which is a look any hipster is sure to love. 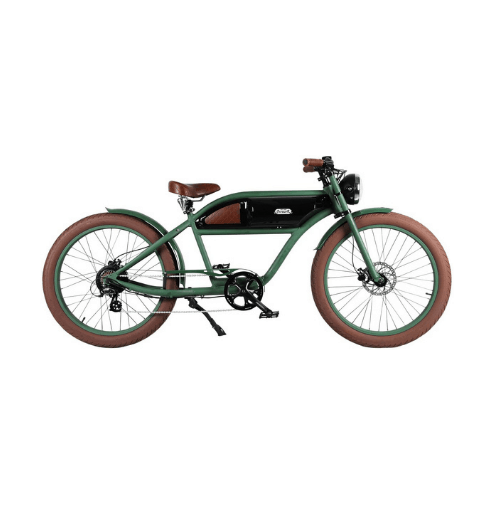 Awesome retro look - brings back the popular cafe motorcycle look of the 70s. This unique bike has all the qualities of a vintage, antique motorcycle

Another hipster-friendly option is this electric beach cruiser from Shi Pao. It has a classic V-type twin-cylinder engine with a lithium battery and a 48V 500W electric motor.

Hipsters and Harleys have a contentious relationship. Many classic Harley riders don’t like hipsters intruding on their brand. However, Harley-Davidson’s sales have dropped steadily for years. They need a new customer base, or they’ll go under completely.

In a bid to attract new clientele, Harley created the Harley-Davidson Seventy-Two. It has retro styling with plenty of customization. You can pick the colors, chrome, and much more.

If you’re looking for more vintage Harley-Davidson gear, check out these framed Harley prints. They’re an authentic replica of the original patent designs from 1919 and 1925. 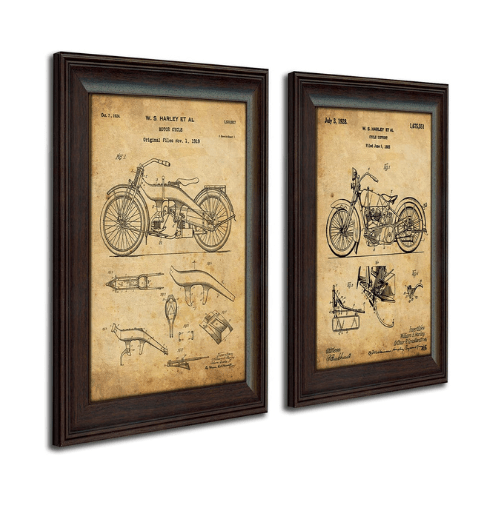 This is a framed two piece set. Each print is based on vintage Harley Davidson Motorcycles and artistically set on a vintage paper background. Each print is published as a fine art giclee and finished behind glass in a 14"x17" contoured polystyrene frame with a wood grain finish.

The Triumph Thruxton is a parallel-twin café racer made in Britain. It’s arguably the most famous café racer ever, popularized by the King of Cool Steve McQueen in the WWII film The Great Escape. Yes, it’s that motorcycle from the big jump scene.

Unlike many of the classic bikes on our list, the Triumph is thriving today. They enjoyed a resurgence in the 2000s, which continues today. As you might expect, the hipster love for these bikes played a large role in their comeback.

Beyond the bike, you’ll find plenty of awesome Triumph merch including an LED sign from Lamazo, a vintage thermal shirt from Lucky Brand, and more. Fans of the brand’s history will enjoy Triumph Motorcycles in America by Lindsay Brooke and David Gaylin. 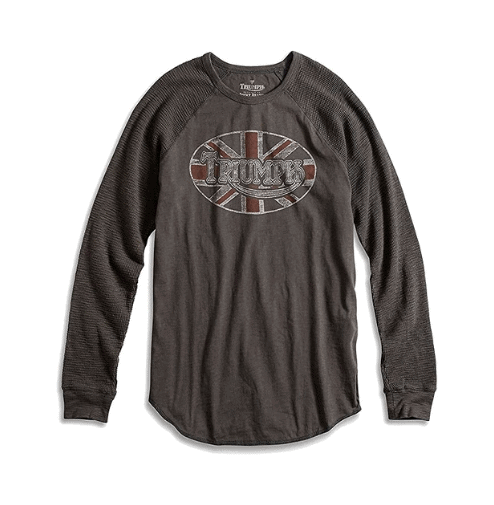 Vespas first hit the scene in 1946, and they’ve remained popular among hipsters ever since. While the original Vespa was a single model, today the line includes multiple options with various features and sizes. With a distinct style, you can spot a Vespa easily due to the following key features:

They’re designed for urban environments. You can zip through tight corners and around both pedestrians and vehicles. Of course, since they first hit the streets, they’ve also been a style icon. The history of the Vespa is detailed, along with plenty of photographs, in the hardcover book The Life Vespa. 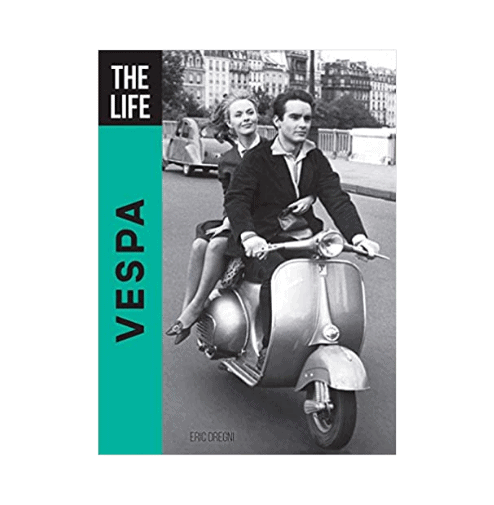 The Life Vespa celebrates all aspects of the scooters and the thriving culture that surrounds them. Since Vespa is affordable and in high-style, the life Vespa encompasses all walks of life, from street urchins to celebrities like Audrey Hepburn, John Wayne, and Brad Pitt.

Keep in mind Vespas do have potential hazards. Namely, other vehicles can have a hard time seeing you on the road. Always wear proper safety equipment when riding. Most riders prefer a full-face helmet such as this retro-styled scooter helmet from WXHJM or this chrome helmet from Vespa.

For the ultimate in hipster cred, you can forgo the Vespa in favor of the Lambretta. Available with either two or four-stroke engine, it’s the Vespa’s main competitor. 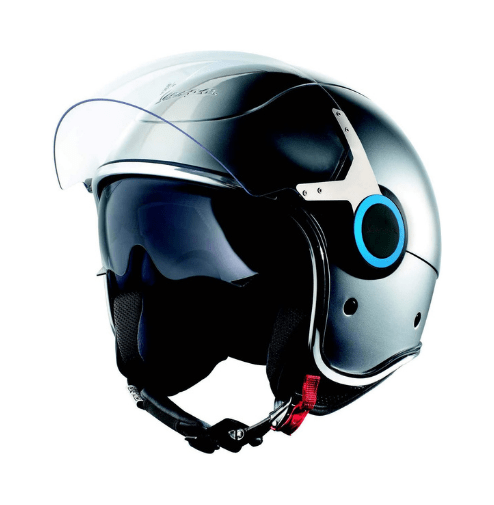 Iconic Vespa VJ Helmet is Made in Italy! A special care in production and assembling, in addition to exclusive features like the shell edge and Visor brackets in glossy Black, are pushing even higher the limit of this best seller in the helmet market. ABS Shell, full length clear visor and internal retractable sun visor are completing the safety equipment of this model.

When hipsters first showed an interest in motorcycles, many motorcyclists weren’t happy. But hipsters have breathed new life into the world of bikes. They’re helped put the spotlight on long-forgotten favorites such as the Ural, Gold Wing, many café racers, and more.

Hipsters aren’t shy about exploring forgotten motorcycle trends, types, and styles. The options on our list are a great way to discover hipster motorcycles and related gear you’re sure to love.