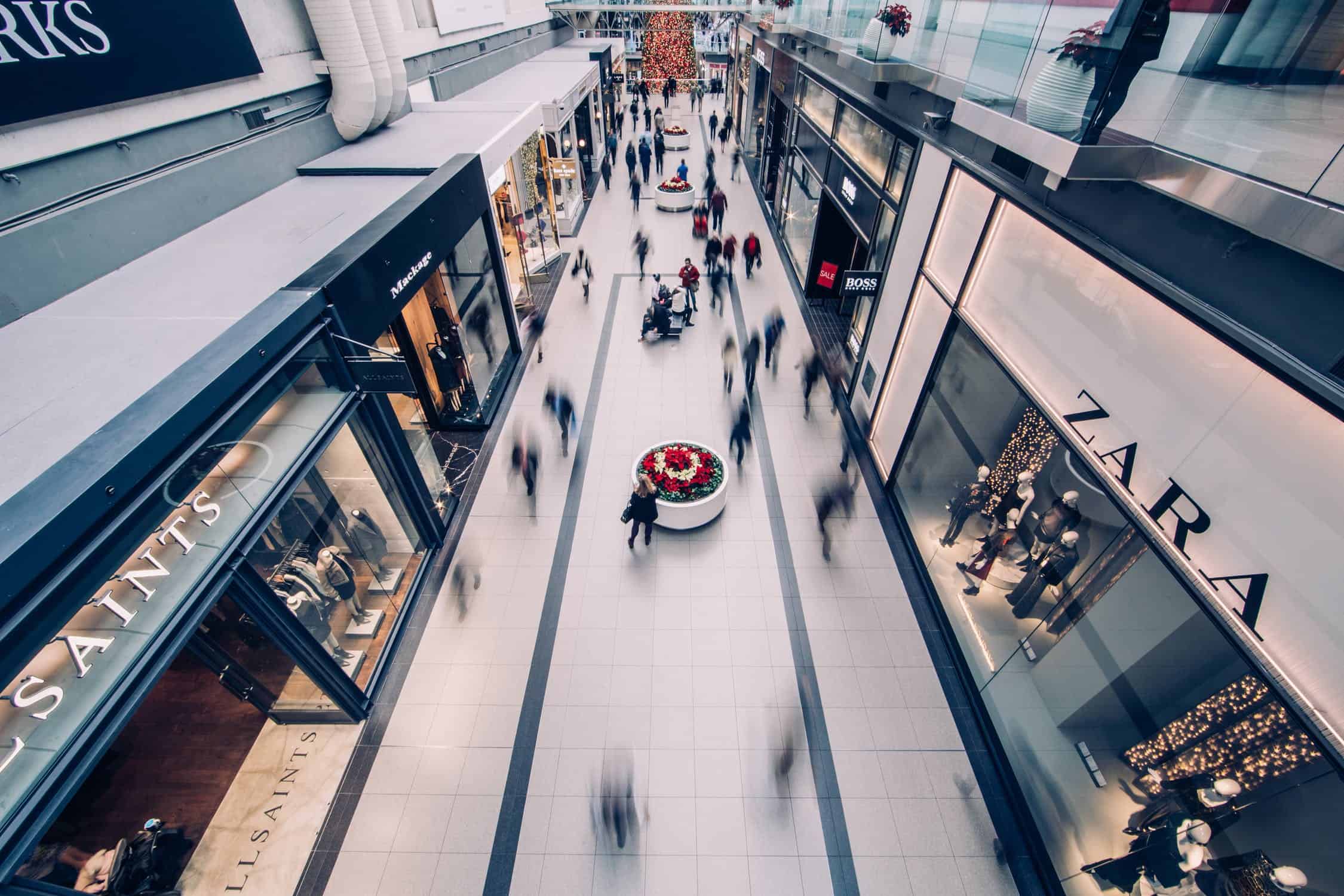 Hipsters are known for their counter-culture attitude, even if that subculture is now a bit mainstream. With the rise of hipsters came the increased popularity of several stores.

Some of these retailers are known for their kitschy and ironic items, while others saw an influx of hipsters because of the revival of thrifting culture.

Hipsters have a significant impact on retailers in specific areas, especially in urban locations in many states. In particular, cities such as Portland, Seattle, Austin, Brooklyn, and more recently, downtown Detroit, can see a notable impact from hipster gentrification.

Before we dive into the top hipster stores, it is worth noting that there are now a handful of different hipster types. There are the DIY hipsters who craft everything. There’s the classic hipster who sports classic looks like rolled jeans, a plaid shirt, a beanie, and glasses with coffee in hand.

Then you have the vintage hipster, who probably uses an iPhone but touts all things retro, including but not limited to: vinyl records, typewriters, 1970s clothing, mid-century modern furniture, Polaroid cameras (and now increasingly, disposable cameras). These hipsters often love classic rock but are typically down for some contemporary indie music.

You can also find a lot of elitist or in-denial hipsters these days—either individuals who leveled up in life but still drive hybrids and speak nostalgically about the Obama era and their open mic days.

Or they refuse to admit they are a hipster even though all signs point to locally-owned coffee shops and I hate it if it’s a popular attitude.

There is also irony built into the irony in some cases, such as the “hickster.” The hickster blends the hipster world with things that classic hipsters would snub, such as country music, and hunting while drinking their Pabst Blue Ribbon (PBR).

We also have the health-obsessed hipster. While being healthy and environmentally-conscious is a typical hipster trait, these individuals take the love of yoga, green juice, urban gardening, new-age spirituality, and wearing Toms shoes to new levels.

With these various types of hipsters in mind, let’s explore favorite stores among the demographic. 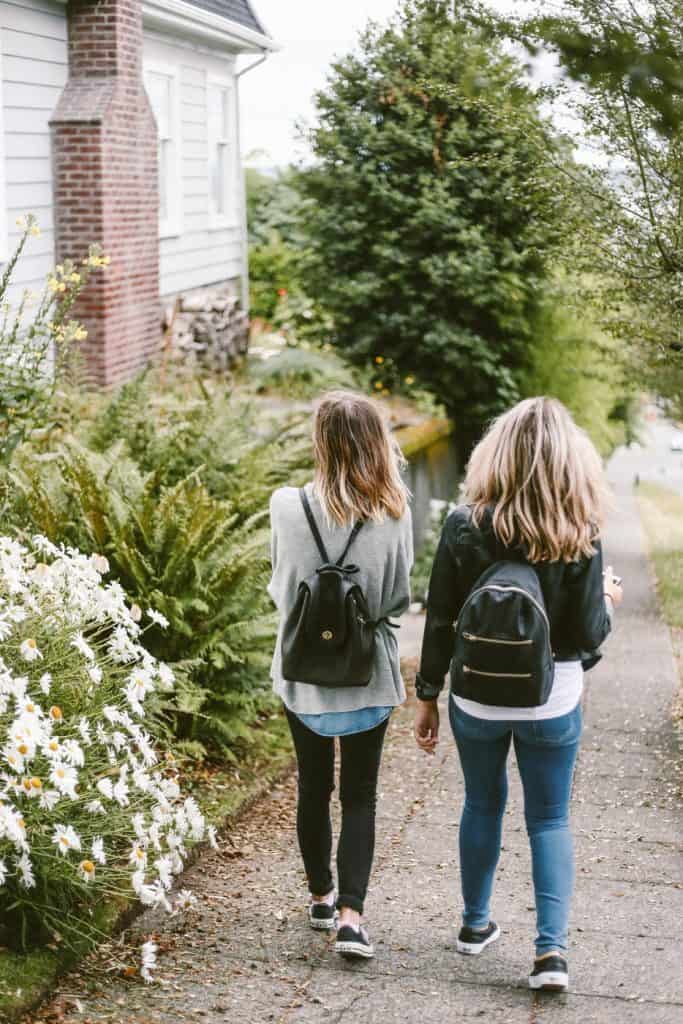 Thanks to ironic shirts and gifts, quirky and vintage styles alongside current, youthful trends, Urban Outfitters is a cult favorite for a lot of hipsters.

If more hipsters knew about the CEO of Urban Outfitters and some of their donations, which are counter to what many hipsters stand for, this retail chain might be a bit less successful among the demographic.  (Do your homework, hipsters.)

However, the brand is still a favorite among a lot of the counterculture group, especially some of the younger demographic. Part of Urban Outfitters’ marketing tactic seems to stem from controversy, such as naming a shirt color “Obama/black” and selling a Kent State University sweatshirt with a dye that is meant to look like blood spatter.

For those too young to know, the May 4 massacre happened at Kent State back in 1970. A school shooting—hardly a topic to wear an ironic “joking” shirt about these days.

Somehow, Urban Outfitters still prevails as a beloved store among many hipsters, perhaps because Instagram styles worn by others hipsters overshadow some of the news about the retailer. 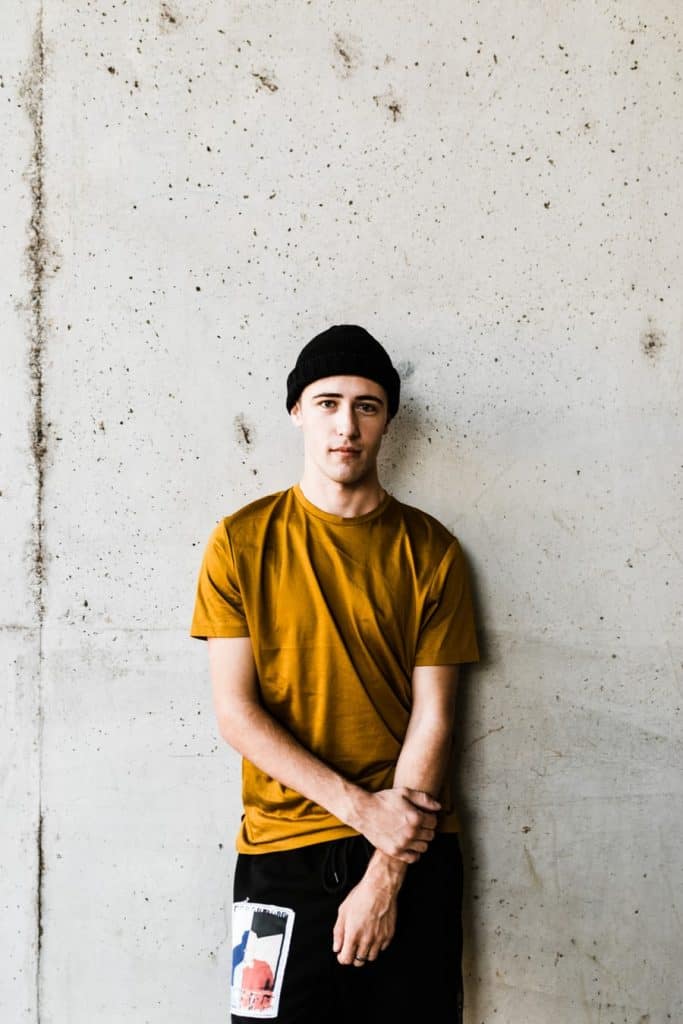 Another cult following belongs to American Apparel, known for its sometimes minimalist, sometimes provocative, and controversial advertising. Another notable aspect they tout is that of being “sweatshop-free” and ethically made clothing.

American Apparel has featured minimally dressed (think bodysuit and nothing more) women, and sometimes featured employees as models for their ads.

These days, American Apparel used a more natural look on many of its models, is diverse in the models they select, and also embraces more of a variety of body types in its images. All of which hipsters tend to stand behind.

Goodwill and the Salvation Army 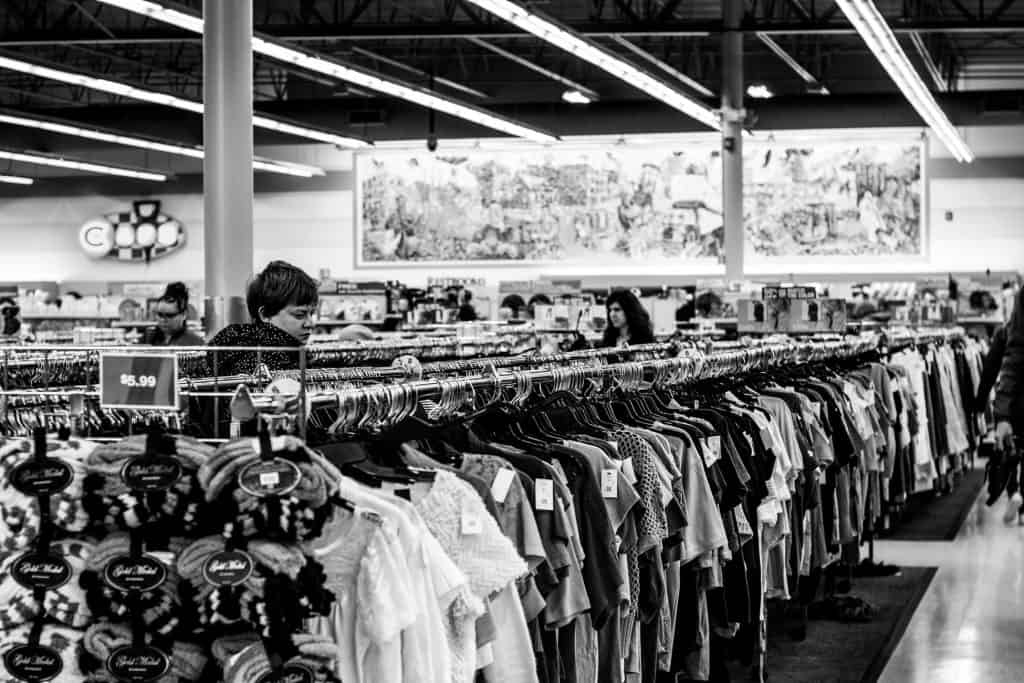 Thrifting became popular among hipsters in part for its eco-friendly reuse mentality, partially because of the chance to find unique clothing no one else wears, and in part thanks to the hipster love of almost any retro aesthetic. Macklemore’s song probably didn’t hurt the whole thrift shopping trend, either.

Thrift stores are certainly not limited to Goodwill or the Salvation Army, though. Anywhere you can find a decent thrift store and hipsters in the vicinity, you have a match made in vintage heaven.

Thrift stores are a favorite among hipsters because they are affordable, too. When you live in a place like Brooklyn, and you’re not quite making bank yet, you need to work with a wardrobe on a budget. Sure, it’s not as expensive as Manhattan, but it’s still costly.

Whether you want a plaid shirt for a couple of bucks, authentic garb from the ‘80s or ‘90s, vintage costume jewelry, or retro (ironic) wall art, a thrift store is a cheap and easy place to find it. 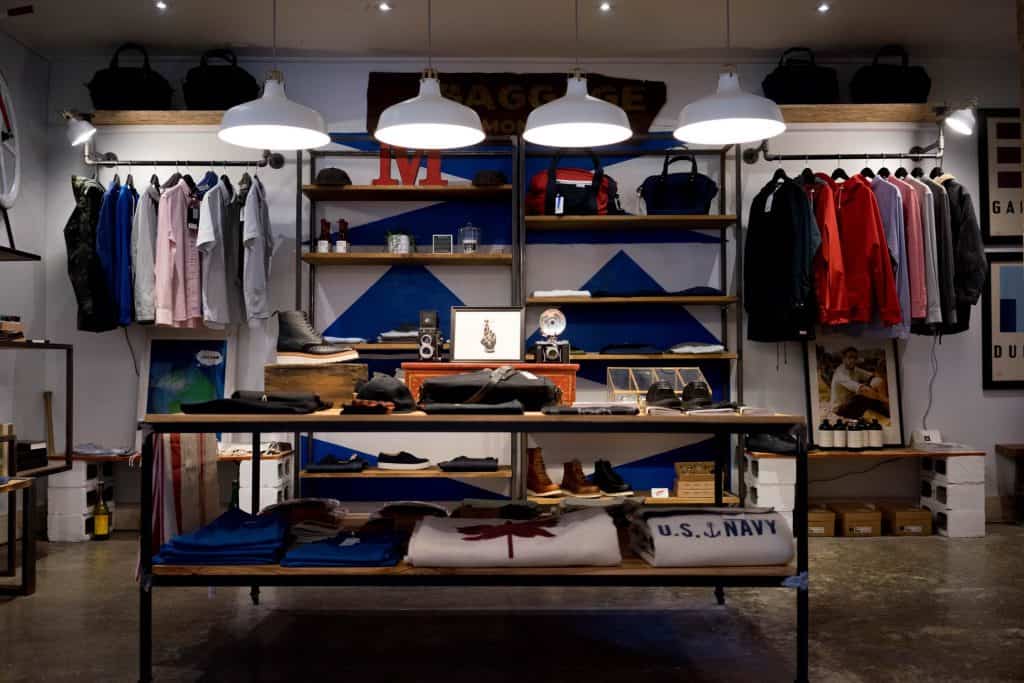 Clothing from H&M is more mainstream than some of these other shops, but it still makes the list for a lot of hipsters.

Their clothing is very affordable, they keep up with a lot of younger trends, and they sometimes have old-school holiday sweaters and plaid shirts available (without having to wear something a stranger wore for years before donating it).

H&M also has a home décor line with several items just quirky or ironic enough to suit a hipster’s sensibilities. We think H&M falls in line with some of the buying habits of in-denial hipsters and slightly mainstream, trendy hipsters. 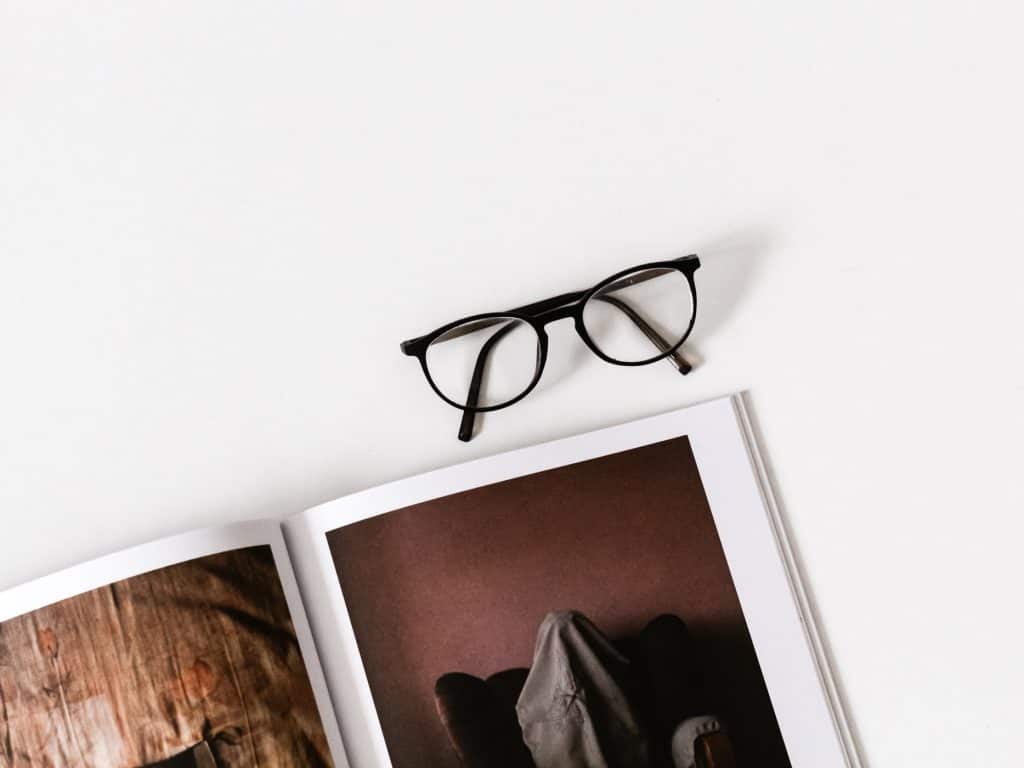 It’s challenging to picture a group of hipsters without at least a handful of them sporty glasses. Hipsters hugely brought back the popularity of thick-rimmed eyeglasses back in a time when thin metal frames or “invisible” frames were in fashion.

Warby Parker makes eyeglasses for those hipsters who actually need a prescription—and those who don’t, as they offer non-prescription lenses, too. Their story aligns with the counterculture mentality. Warby Parker began out of a desire to create more affordable competition when a monopoly dominated most of the glasses market.

Warby Parker also teamed up with VisionSpring to donate a pair of glasses to someone less fortunate every time they sell a pair of glasses. Taking on the big conglomerates working charitably, what could be more hipster? Wearing glasses, and that’s why Warby Parker makes our list. 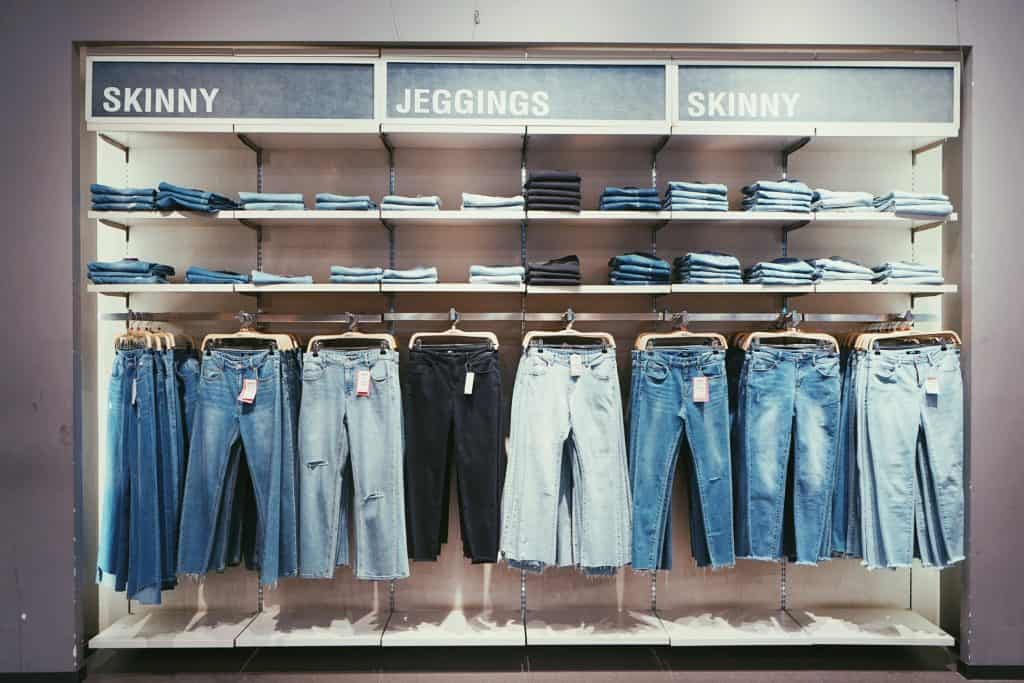 Levi’s are so classic they could almost be considered retro. Yet they still work for trends today. Most things denim work with the hipster aesthetic. The company is also vintage, starting way back in 1853.

Whether it’s lumberjack overalls, a denim jacket, or timeless pair of dark jeans you can roll up right above your Converse, Vans, or Toms shoes, Levi’s are both vintage and contemporary at the same time, much like hipsters. 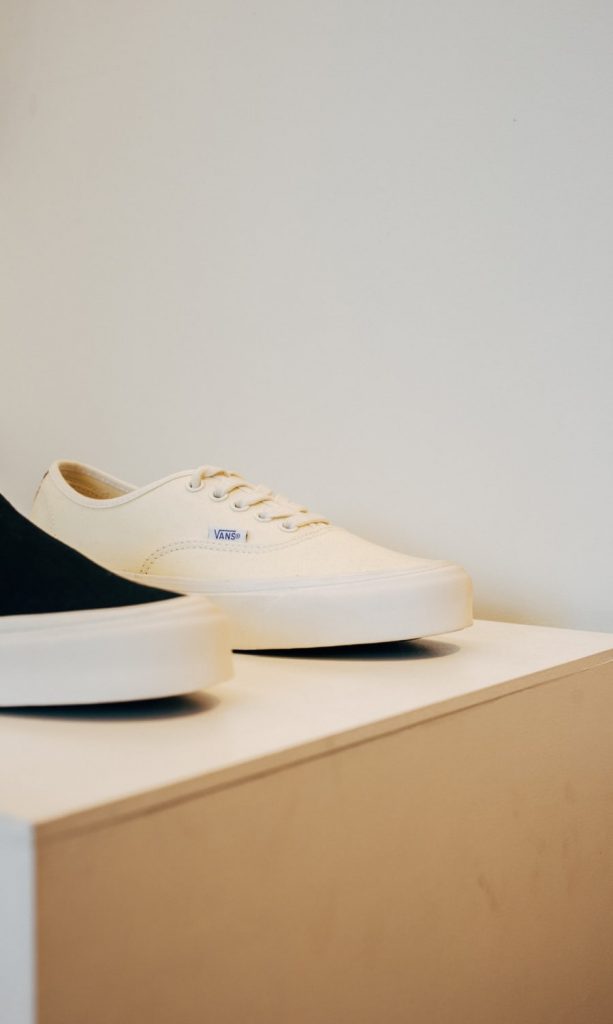 On the topic of shoes, hipsters tend to love shoes that are either considered skateboarding sneakers, or ethically-run companies such as Tom’s. Okay, this is technically listing three retailers, but you can find all three on Zappos, and we like all our shoes in one tidy place, like a closet.

Both Vans and Converse are classic and popular among the beard-growing, suspender-wearing crowd.

Especially now, with the ‘90s coming back in style thanks to teenagers thinking of the decade as retro (we’re still trying to process that information), the ‘90s skater aesthetic is vintage, trendy, casual, simple to mix with a variety of clothes, and not to mention comfortable for walking around a city.

Tom’s also became huge, partially thanks to hipsters, and the simple design of these shoes is now an iconic look for eco and ethically-minded consumers. Tom’s is big on giving back, and that’s part of what made them famous among the hipster crowd. 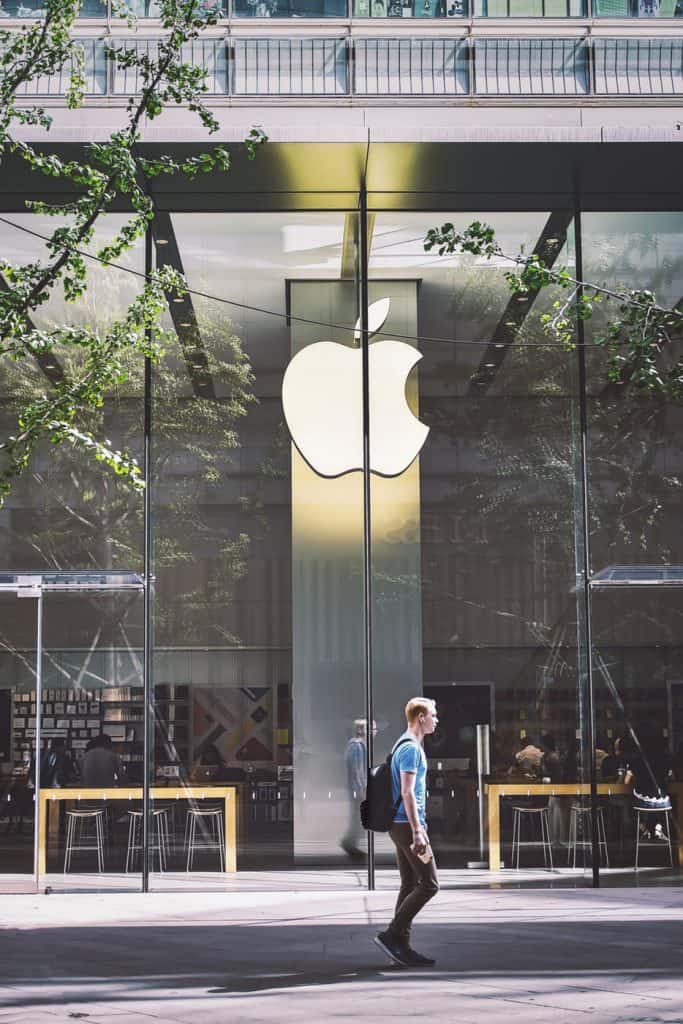 You might see some hipsters using an Android phone, but by and large, Apple is the product among the hipster crowd. Whether it is iPhones, iPads, or Apple’s MacBook laptops, hipsters love the creations and legacy Steve Jobs left behind.

Part of the reason hipsters and Apple go hand-in-hand with each other is thanks to the marketing campaign in the 2000s that featured Justin Long as a humanized version of Apple products, versus John Hodgman, who embodied PCs (namely, Windows).

In the campaign, PCs seemed nerdy, but not in a cool way, uptight, and overtly mainstream and corporate. Conversely, Apple got a reputation for being relaxed, counter-culture, young, and hip.

The marketing tactic came around the same time as the rise of hipster culture, and the company and the hipster population have remained closely associated with one another ever since.

Hipsters support a lot of “mom and pop” shops and are big on buying locally when possible, so the reality of the top hipster stores is more likely a massive jumble of privately-owned retailers and affordable boutiques, indie shops on sites like Etsy, along with the outlets we mentioned.

You know Whole Foods and Traders Joes are part of the shopping habits of the hipster crowd, also. If we’re realistic, Target should probably get thrown in the mix, because hey… we’re all human.